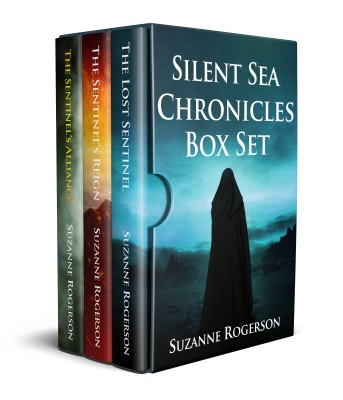 I am SUPER excited to be helping spread the word of this fantastic offer – The wonderful Silent Seas Chronicles series by Suzanne Rogerson is available to purchase together as a box set for the very first time – And for this week only, you can grab all 3 books for only 99p/99c!

I had the pleasure of reading these books earlier in the year; If you want to refresh your memory on my thoughts of them, you can check them out below:
The Lost Sentinel – Book 1
The Sentinels Reign – Book 2
The Sentinels Alliance – Book 3 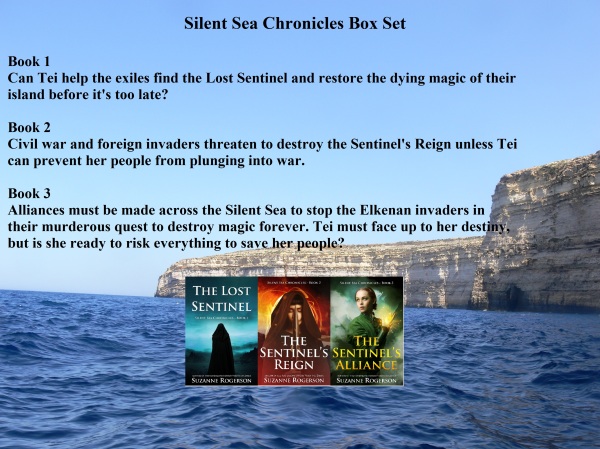 Tei has magic in a world where people like her are persecuted and forced into exile. Whilst fleeing their home, her father is attacked and his deathbed confession reveals a dangerous secret that will change her life forever.

Tei’s homeland, the magical island of Kalaya, is dying and without a Sentinel to restore the magic, it’s only a matter of time before all life is wiped out.

She must join the exiles in the search for the lost Sentinel, but they are not the only ones after the missing guardian. Sinister Masked Riders are on their trail and time is running out.

Tei must risk everything she loves to save Kalaya, but is she ready to make that sacrifice?

1396 pages of magic, adventure and intrigue.

This is a story about war, magic, and destiny, which you cannot miss. Following the characters during their journeys has been incredible… (Goodreads) Sofia – A book. A thought.

Love this series!!…The Sentinel’s Alliance is an epic conclusion to a fantastic series. (Amazon) Jessica Belmont

I have really enjoyed this series and strongly recommend it to those that enjoy fantasy stories… I can’t wait to read more from Suzanne Rogerson. (Goodreads) Jessica Bronder

What an epic journey this trilogy has been…There are some terrific battle scenes, with massive shocks, and mouth dropping moments that I just hadn’t seen coming, all delivered with Rogerson perfection. (Amazon top 1000 reviewer. Vine Voice) Susan Hampson

(The Sentinel’s Alliance) This has been a fantastic finale to the trilogy, it’s had everything that made the first two books to good and then some. All of Suzanne’s brilliant world building skills are still shining through… (Goodreads) KT Robson

Rogerson has managed to craft together a fantasy trilogy that is simultaneously complex and quick. So many layers and twists are woven throughout the books and yet it never feels too heavy, the pace moves at a determined clip and action holds one’s attention captive. (Amazon) Angela – Pooled Ink Reviews

The epic fantasy box set will be on sale for £6.99 but for a limited time you can buy it for just 99p worldwide. 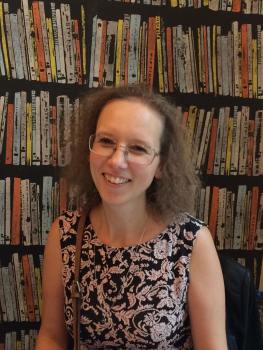 Suzanne lives in Middlesex, England with her husband, two children, a highly strung cat and a crazy puppy.

Her writing journey began at the age of twelve when she completed her first novel. She discovered the fantasy genre in her late teens and has never looked back. Giving up work to raise a family gave Suzanne the impetus to take her attempts at novel writing beyond the first draft, and she is lucky enough to have a husband who supports her dream – even if he does occasionally hint that she might think about getting a proper job one day.

Now an author of four novels including the recently completed Silent Sea Chronicles trilogy and a Czech translation of her debut, Visions of Zarua, Suzanne hopes the dreaded ‘W’ word will never rear its ugly head again!

She loves gardening and has a Hebe (shrub) fetish. She enjoys cooking with ingredients from the garden and regularly feeds unsuspecting guests vegetable-based cakes.

Suzanne collects books, is interested in history and enjoys wandering around castles and old ruins whilst being immersed in the past. She likes to combine her love of nature and photography on family walks, but most of all she loves to escape with a great film, binge watch TV shows, or soak in a hot bubble bath with an ice cream and a book.